"The Ouija Board of Roleplaying Games" - Occult Victorian parlor games for those who love paranormal investigation and ghost stories.

There is nothing quite like them. The Papers combine elements of live action roleplaying games, mass hypnosis as performed by stage magicians, the guided meditations of Tibetan monks, and séances of turn of the century spiritual mediums.

Each game promises an immersive night of supernatural exploration for you and group of friends, placing you at the center of a real life ghost story.

The games are each unique, guiding you through a series of séance-like paranormal investigations.

Each of the ten games is connected to the next, following the story of the mysterious Mr. Frost and his own experiments over a hundred years ago.

They let you follow his footsteps as carefully as you can to unveil clues about the strange realm called the Grey beyond the Fog and the Shadowman that stalks it.

There are no scripts, no actors, and no props. These games provide you the framework to have genuine frightening experiences heavy with occult and supernatural theme.

It’s the closest thing to being in a supernatural horror movie you’ll ever experience.

In order to download this game you must purchase it at or above the minimum price of $10 USD. You will get access to the following files:

The Frost Papers is a horror trpg minigame anthology with a distinct victorian vibe. It works both as a paranormal games simulator, and as a sort of suspenseful short story.

Overall, it plays a bit like a slenderman-style indie horror computer game, but it leans hard into the ritual aspect. As such, it sometimes feels less like a game and more like a strict code of instructions you are required to follow for your own safety (and the safety of any others who are participating.)

Frost Papers is multiplayer, though, and honestly I'd recommend it more with a group than with only two people. It feels like staring into a darkened mirror and reciting Bloody Mary. You get a nice chilling horror hit if there are other people to share the experience with. There's just tension if you do it alone.

I do want to note that there are some elements that are maybe hypnosis-adjacent in the first game. Visualization, guided images, counting to ten to wake up, etc. Likewise, the second game uses lucid dreaming, and the third game uses physical restraint. Near the end of the book, there's a game where you spill your own blood. My personal feeling is, don't do this. Especially for the near-hypnosis and restraint and blood stuff, I wouldn't use it, but at minimum you probably want to check extensively with your group first to make sure they're okay with it.

Because Frost Papers is written in-character as a series of letters, it doesn't have a completely robust safety section, so you may also want to use your own. If someone feels uncomfortable with a game and its themes, having a way to stop gameplay may be helpful. Likewise, something like a banishment to lay to rest the feelings that the game conjured up may be welcome.

Overall, I think I'd recommend this more as an inspiration for use alongside Call of Cthulhu or another horror game. The first ritual is genuinely performable, and there's a solid occult card game called Blind Jack later in the book, but a lot of the games really have you commit to the bit. If that's your jam, this game definitely is too. If not, it's still a cool and immersive read and has a solid story woven into it. 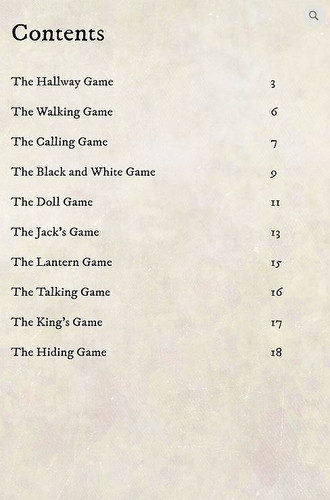 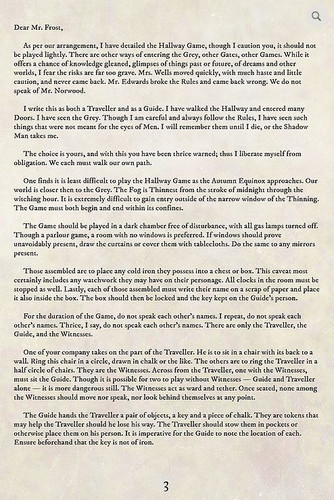 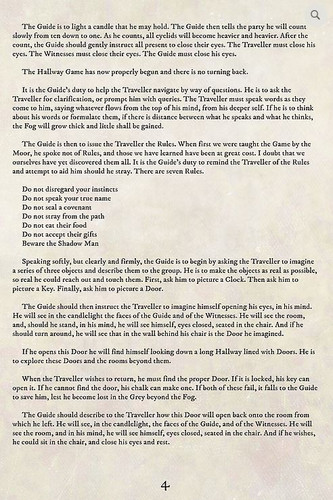 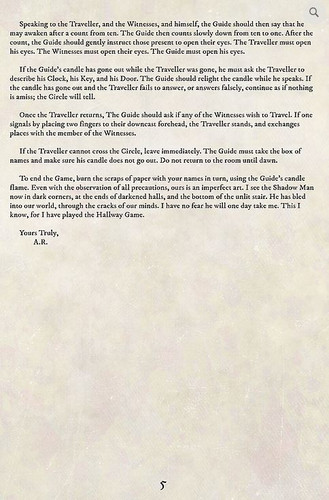